Besides enjoying the green of the mountains and the blue of the sky and of the water of Lake Idro, there are very interesting places to visit in the area.

They are all traditional towns with narrow streets and splendid wooden balconies giving the tourist the impression that time has stood still.

A typical lakeside town at the centre of Lake Idro, with a small historic centre, a lakeside promenade that goes as far as the Rocca d’Anfo park, the ancient church of St. Antonio, a beach with facilities, tennis courts and a mini-golf course, restaurants, pizzerias and a mini-market.

A typical lakeside town at the south of Lake Idro, composed of a number of districts including Pieve, Lemprato, Crone and Vesta; with clothes shops and food stores, beaches with facilities, play areas, a tennis court and bowls area, a lakeside promenade and a traditional street market every Wednesday.

A lakeside town with a beach with facilities, a play area and a lakeside promenade that goes as far as Borgo S. Giacomo (where there is a 13th century church), and a traditional street market every Tuesday.

A typical mountain village with a panoramic historic centre. It’s a short distance from Baitoni beach, which offers strong winds for kite-surf enthusiasts.

There are some very beautiful locations a short distance from Lake Idro.

The pass (1450 m. altitude) can be reached from Anfo via an exceptionally beautiful mountain road. You can then continue in the direction Maniva- Crocedomini Pass (the latter is one of motorcyclists’ favourite itineraries). The Cima Ora Fort (First World War) is a short distance from the Baremone Pass, and offers a magnificent view of Lake Idro.

Bagolino is situated to the northwest of Anfo. It’s an ancient hamlet famous for the traditional carnival and for “BAGOSS” cheese. Continuing in the same direction you reach Gaver, a tourist destination famous for trekking and horse riding as well as for winter sports.

Treviso Bresciano and the Fobbia Pass are situated to the south of Anfo. The Fobbia Pass is famous for its typical local dishes (polenta and meat cooked on a spit) and abundant trekking routs for all ages and abilities.

Val Vestino lies east of Anfo. The town and the lake of the same name separate Lake Idro from Lake Garda. Cima Rest, famous for its unusual Hungarian barns, is particularly interesting.

The Adamello and Brenta Dolomites, with their peaks exceeding 300 m., offer numerous treks for experts on rock and ice.

NOT ONLY LAKE IDRO:

Various destinations of cultural and commercial interest are much appreciated by our guests.

One of the most popular Italian lakes, where you can go shopping and visit the famous “Gardaland” amusement park, is situated 40 km from Lake Idro.

Here you can find immense vineyards and wineries 80 km from Lake Idro where you can buy top quality wines.

At a distance of 40 km from Lake Idro, Val Trompia is famous for its mines where you can make guided tours in the mining park.

Situated 100km from Lake Idro, at Valle Camonica you can see prehistoric rock engravings dating back to 8000 B.C..

In Brescia, 60 km from Lake Idro, you can visit important museums, the “Castello” (Castle) and the Official “Mille Miglia” Museum, famous for its vintage cars.

The city of Romeo and Juliet is 100 km from Lake Idro, famous for its Roman “Arena” where operatic works are performed.

The magnificent lagoon city with its marvellous “calle” (narrow streets) and wonderful bridges is 220 km from Lake Idro.

The city famous for its Duomo, the “Scala” theatre and also for high fashion and its shopping, is 150 km from Lake Idro. 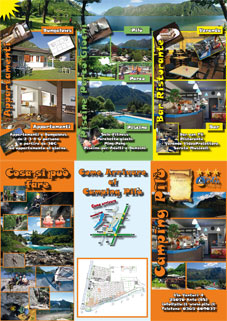